Bokashi and vermiculture are great alternatives to composting. Bokashi Vermicomposting puts it all together! 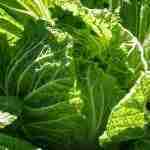 Composting.  We’ve all done it.  We save our leaves, weeds, kitchen scraps, haul manure, spoiled hay, you name it, and then build the pile, water the pile and turn it as often as we can.  Composting is a fairly intensive process requiring the ingredients to have the correct C/N ratio in order to heat up yet decompose aerobically. Aerobic composting emits a surprising amount of greenhouse gases into the atmosphere. Compost piles need to be turned to keep the contents oxygenated and working quickly, plus they require a fair amount of space. And in our experience, they can attract rodents if food scraps are used.

Enter vermiculture and bokashi fermentation as alternatives to composting, especially in small gardens. Both methods are used to rapidly process food waste into a soil amendment. Both have their drawbacks; worms are picky about what they eat and do not eat raw food scraps very quickly, preferring rotten food to fresh. Bokashi fermented scraps should be used fairly quickly, and are wet, actually slimy.  They aren’t the sort of thing you want to put a handful of under a transplant.

Enter Bokashi Vermiculture. We put the two processes together to get the best of both worlds. The result is a stable, high nitrogen soil amendment. Simply put, we use bokashi fermentation to process two vegetarian household’s fruit and vegetable kitchen waste, then feed the fermented mess to our worms who seem to thrive on it. The worms rapidly process the bokashi fermentation product into vermicompost. From kitchen to vermicompost takes less than 8 weeks in the warm season, which means we get more vermicompost in less time. It’s not a new idea, but then again no one else seems to be doing it.

Both bokashi fermentation and vermicomposting conserve nitrogen compared to aerobic composting, and the result is a high nitrogen, stable soil amendment. A handful under transplants in mineralized soil results in great veggies, like the Chinese cabbage in the picture.

There are plenty of places to buy worm bins and bokashi fermenters. We don’t use either of those, but instead put ours together out of inexpensive parts as described below. Ours is not a system for apartment living, but it could be scaled up or down depending on available space and raw organic matter. 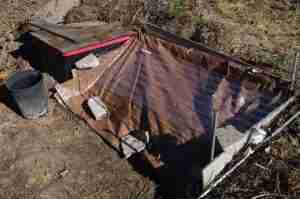 We have a simple 3′ x 5′ worm bin that is built into the side of a hill. The bottom and sides of the bin are cement backer board pieces left over from a bathroom tile project. The cement board does not absorb water and is solid on the bottom, helping keep the worms moist and any burrowing critters out. Anything solid could be used for the floor; we just used what was around. The cover is a plastic tarp with a second acrylic panel cover to help keep the sun from rotting the tarp. Being built into the hill helps to moderate the temperature in the bin – worms do their best between 70 – 80F but they survive from 38F to 95F. This bin has yet to go through a winter, although our coastal California winters are hardly cold. If we lived in a cold climate we might cover the whole thing with a thick layer of straw and let the worms go dormant for the cold season. If we lived in a wet climate we might not build it into a hill, and take more care to keep rain out. 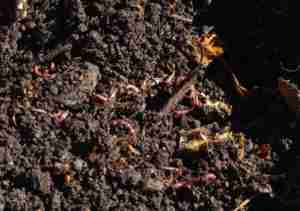 Our worms are red wigglers, a.k.a. compost worms, Eisenia fetida. Our first handful of worms came from a friend, eventually multiplying from just a few to really a lot. Reproduction does not happen overnight though, even though one adult worm can ultimately produce 10 babies a week. It takes 3 – 5 months for a worm to grow from egg to sexual maturity, so there can be a delay if you don’t start with enough worms. Other native decomposers like pillbugs, sowbugs and earwigs live in our bin, as do some extremely healthy looking lizards. In the picture to the right, uneaten bokashi fermented veggies are visible, which is why the worms are there.

We started our worm careers with a more traditional worm bin, the kind with stackable trays. This worked when we were feeding the worms just a few small scraps. The trouble is that most of our scraps are large (outer cabbage leaves, onion peels, carrot tops) and the little trays could not handle them. And although the tray system worked, it did not produce very much vermicompost. We consider our in-ground bin to be a real improvement.

Harvesting the Castings / Feeding the Worms

To harvest worm castings we move the darker, denser material to one side of the bin with a shovel. This allows the vermicompost material to dry out a little and the worms to move back to the center of the pile. After a couple of weeks we sift these castings into a bucket through an old nursery flat (about 1/2″ mesh) to get any undigested large chunks out like mango pits or avocado seeds. These go back in pile for further work by the worms.

The worms are ready to be fed when most of their food in a certain area has turned into dark castings. We shovel out the darker castings and worms leaving a layer of worms and castings at the bottom, then dump in up to 5 gallons of fermented bokashi, then cover the raw bokashi entirely with dark castings and worms. If there are not enough dark castings to cover the worms with, they are not ready to be fed. If dead leaves or other decaying plant material is available, it could be layered in with the bokashi.

At the same time we are feeding, we “fluff up” the active feeding sections of the pile by gently turning it with a shovel. The idea is to make sure that there are no large sections of undigested bokashi. Even though the bokashi ferment is anaerobic, the worms like to eat aerobicly digested food. It does not take long to convert the bokashi to worm food – contact with a little air will do it. Be forewarned; if you are feeding straight bokashi, this process is not completely smell free! The addition of dead leaves or partially decomposed regular compost at bokashi feeding time will make the “fluff” process more pleasant.

There are many websites and stores now that sell bokashi fermentation supplies; we even saw a bokashi fermenter for sale at Whole Foods. These systems may work very well, but we made our own, including our initial batch of EM1 starter microbes.

Traditional bokashi composting is an anaerobic process using EM1 microbes to rapidly ferment raw organic matter (more about the microbes later). The raw organic matter, in our case kitchen scraps, is mixed with EM1 inoculated roughage, in our case wheat bran, and pushed down to remove all air (more about the bran later). The resulting mix is fermented in a sealed container for several weeks at room temperature. 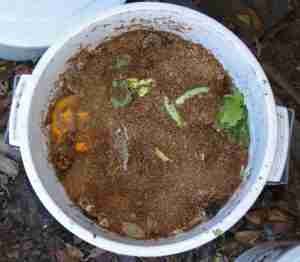 The picture at right shows a brewing bucket with it’s inner plastic wrap seal off. We use a 5 gallon bucket with a sealable lid and cover the bokashi with a layer of thick plastic wrap before putting the lid on. Note that 5 gallons of solid food scraps and bran is heavy – it can weigh up to 40 pounds. It is possible to find smaller buckets or not fill them all the way up to reduce the weight.

Bokashi needs anaerobic conditions (no oxygen) and a little air can cause it to turn black, go bad and really stink. Properly fermented bokashi looks like sauerkraut, with all the original bits still identifiable, and has a vinegary smell that is no worse than sauerkraut. Commercial bokashi buckets have a drain at the bottom to remove liquid. We haven’t done that on ours; we just use solid buckets, and the bran helps to soak up any extra moisture.

We keep up to 4 buckets brewing while 2 buckets are being filled with new scraps. It takes about 2 weeks for us to fill a bucket, then the bokashi scraps ferment in the bucket for another 2 – 4 weeks, depending on whether the worms are ready to be fed or not. The bokashi bucket being filled is kept outside (the garage would be another candidate spot) and we keep a separate container in the kitchen to accumulate scraps. We also keep a container of bokashi bran to add to the kitchen scrap container. It helps to keep odors down in the kitchen. When we put scraps in the kitchen container, we add a little bran.

Have you ever wondered how many nutrients you are supplying with your compost? Sometimes it's way more than you might think! We have written a calculator to help you understand exactly how much of what you might be putting on,…

Read more...
How to make bokashi serum (for free!)

There are plenty of good suppliers of EM1(TM) microbes, such as TeraGanix, but to start with I made my own serum from scratch. I got the recipe from Hawaiihealingtree.org but the link is now gone.  Blessings on you, healingtreehawaii.org, I…

We buy wheat bran in a 50 lb. sack for about $25 at our local feed store (2018 prices). Other people use newspaper or sawdust instead of bran but we haven't tried that yet. Rice bran (used for horse bedding)…