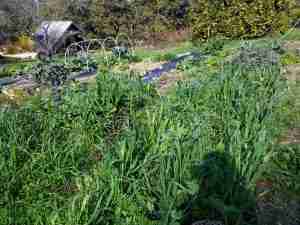 To the left is a picture of a beautiful cover crop, ready to be incorporated into the soil.  If you mow it, then till it in, it will be ready to plant in a few weeks, at which point the clock will be ticking.  Cover crops reach their highest nutrient density just as they begin to flower. Conventional wisdom has this as the moment they are to be mowed down and tilled into the soil in order to build organic matter. What happens is that as the lush green cover crop begins to decay in the soil, the microbe population explodes.  A flush of nitrogen is released into the soil and a flush of carbon dioxide is released into the air.  If you’ve just planted a new crop of seeds or put in transplants, they will start off with a big flush of nitrogen-induced growth. As time goes on, the food source (your decaying cover crop) will be used up and the microbes begin to die off. Your new planting begins to slow its growth as the nitrogen release fades.  Four to six weeks later as your crop heads towards flowering and seed formation, the nutrient release from the cover crop is long gone.  The crop languishes. 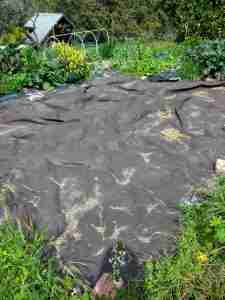 If instead the cover crop is killed by putting a tarp over it, the decay process is slowed down.  Before covering with a tarp, the cover crop is mowed down with a string trimmer, which leaves fairly large pieces of the above ground plant parts on the surface of the soil.  The tarp excludes light and is left on several weeks until the plants die.  The root mass begins to decay in the soil while the above ground plant mass begins to decay on the surface. Now the surface organic matter decays more slowly since it is out of reach of most soil organisms except worms and fungal mycelia. When we lift the tarp we find a huge amount of earthworm activity on the surface. 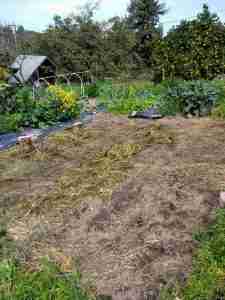 And pleasantly enough, the area that has been tarped doesn’t grow weeds easily.  Weed seeds are no longer brought to the surface with tillage or buried with tillage.  A fine mulch is left on the surface which helps to conserve soil moisture and tilth for the next crop, and continues to release nitrogen into the soil.  The overwhelming microbe party associated with tillage never happened. In our loamy sand soil, the seedbed is ready to plant. For those with heavier soil, a tarped bed may require loosening with a broadfork occasionally to bring in air to the bottom of the bed. In that case, the soil is not turned over, but is just gently loosened from the top by rocking the fork back and forth.

Tarping works so well for us that now our BSC tiller remains quietly in the garage.  We can now build up fungal populations in our light soil.  There is no disturbance of earthworm tunnels.  When we add the few minerals that are required annually in our soil (boron and gypsum) we can just add them to the surface and allow the rain and occasional overhead irrigation to carry them down. The only time we need to disturb the soil is if we want to incorporate something into the entire top six inches as we might do if we were starting a new planting bed or incorporating biochar.  In general we try to avoid disturbing the soil as much as possible.

Deer in the Garden

There are many ways to fail to keep deer out of the garden. We found one way that hasn't failed yet: 3D deer fence. Hopefully you can learn from our failure and success...

Read more...
The Power of Observation

When we put our attention and our powers of observation onto something, we imbue it with our energy.  We begin to see through the veil of separation.  We can use all of our senses with our minds wide open.  And…

Read more...
How Much Nitrogen Shall I Add?

Farmers love nitrogen because they love to see green and vigorous plants, and beginning gardeners do too. However, too much nitrogen results in weak plants susceptible to insect and disease attack. And, if you want to grow nutrient dense plants…