If you are an organic grower and are new to using feathermeal or seed meals you are in for a pleasant surprise. If your garden is small and needs to be very productive you will be delighted with the response. In this photo, you can see how a generous application of nitrogen (along with some boron and gypsum – calcium sulfate, for the sulfur) can change a garden: 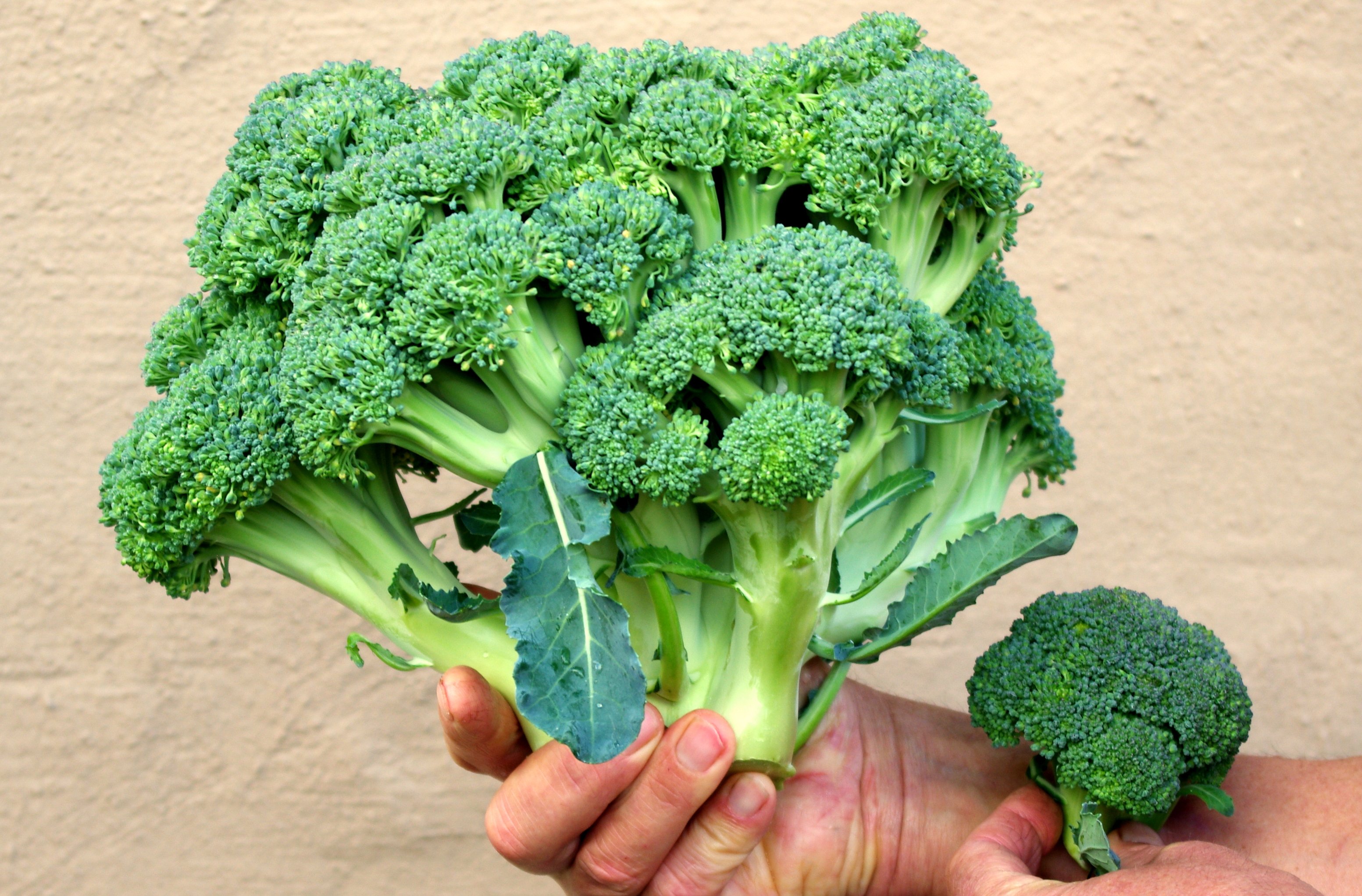 Both Veronica Broccoli plants were grown in mineral balanced soil, but the plant on the left received a fall application of feathermeal, gypsum, and boron. ALL the minerals need to be present for great results.

Most chemically fertilized gardens have too much sudden nitrogen, and as a result, too many bug problems. Most organic gardens aren’t fed enough nitrogen to be really productive.

Soil test results do not usually include nitrogen, as soil nitrogen levels can change even before test results are returned. Nitrogen availability is temperature dependent, and in in the nitrate or nitrite (anion forms), subject to leaching. So, nitrogen requirements are best judged by gardeners and farmers, not soil tests. Shades of green and growth rates are important clues, revealing if sufficient nitrogen is available. Slow growth or a yellowish-green color indicates a nitrogen deficiency. Sulfur deficiency in particular looks like a lack of nitrogen, but we always add sufficient sulfur for the season.

Nitrogen applications are very powerful. They are like stepping on the garden growth accelerator. You want to be sure everything is in tune, and all the other minerals are present and available before ramping up nitrogen applications. In an ecosystem, it is the scarcest resource that limits growth. If your plants lack water, or other minerals, don’t apply lots of nitrogen.

Nitrogen applications are not without their downside. Nitrogen stimulates soil microbes, and they eat carbon. If you are going to apply nitrogen for growth, you need to supply carbon as well. Organic nitrogen sources come with their own carbon, which helps, but is insufficient to cover the entire amount lost. Soybean meal has a C:N ratio of 5:1. Feathermeal’s ratio is 4:1. The lower the ratio, the more effective the nitrogen source (this is because some of the nitrogen is tied up digesting the carbon in the fertilizer). But, the higher the ratio, the more carbon will be pulled from the soil to run the microbe machine. If you are going to add concentrated nitrogen, you also should add carbon as mulch or compost. If you don’t, the carbon in your soil will be converted into microbe fuel. When the microbes die, they become plant food, often as nitrates. The nitrates that aren’t used by the plants can be lost by leaching or to the air.

In my own garden I want to grow the best quality (nutrient dense) food I can. My secondary goal is the production of fresh and preserved vegetables, year-round. So, my gardening is skewed toward quality and efficiency, without too many other constraints. My limitation is labor — I do all the vegetable gardening myself. For me, it makes sense to run the garden with the accelerator pretty much wide open. By adding nitrogen, I can plant closer together and get a larger harvest from a smaller area. This makes mulching and weeding easier. Honestly, I like harvesting quantities of large, great tasting vegetables. But, this strategy is not for all circumstances. If you space your plants further apart you will get fewer but larger vegetables. You won’t need as much nitrogen. Your plants will be more drought tolerant. Your plants can maybe live on less applied water, as they will be drawing moisture from a larger area. Determining nitrogen application rates requires understanding your garden’s limits to growth, and some real thought about what you are trying to accomplish in your garden.

The nitrogen application rates we recommended are approximate. Application recommendations are calculated at a 100 lb/acre Nitrogen rate, which in the case of 12% N feather meal, is 800 lbs/acre. This is a good level of nitrogen for tomatoes and root crops, which don’t need lots of nitrogen. I wouldn’t exceed 100 lbs/acre for these plants. In a mixed vegetable area, the usual strategy is to apply 100 lbs/acre nitrogen to the whole area, then more to those plants that need more. In cool climates always apply at least 100 lb/ac N as seedmeal or fishmeal in the spring.

Squash, all brassicas, corn, lettuce, and other nitrogen lovers can use 200 lbs/acre, assuming the other minerals are present. And if you want huge plants, you can add even more. But, I wouldn’t go above 300 lbs/ slow release organic N under any circumstance. Establish a background, slow release nitrogen level, and supplement with foliar or liquid or solid quick release nitrogen as needed, especially when the soil is cold. If you get aphids, you have used too much nitrogen. Spray them off with water, and use less nitrogen next time.

Here is an Ag industry chart originally titled Plant Food Utilization. These numbers are supplied by fertilizer dealers — possibly they represent the maximum amounts of chemical fertilizer which can be applied to various crops. We include these numbers to show the wide relative range of nitrogen and other nutrients used by different crops:

Excess nitrogen on lots of acres is a pollution problem. This is unlikely to occur on organically farmed land, because of cost constraints if nothing else. In a small backyard vegetable garden, the cost of organic nitrogen is not so much a concern, and the environmental impact of unused nitrogen from such a small area is minimal. Still, it is certainly worth capturing any residual nitrogen left after the vegetable garden and growing a nice cover crop.

You have lots of choices for organic nitrogen. There are quick release sources for cold soil, both liquid and solid. I like to mix a handful of vermicompost or a tablespoon of quick release high-nitrate bat guano into the soil below transplants. Other quick release options are fish meal, blood meal, or fish fertilizer. There are slower release sources like seed meal. Cottonseed meal is a nice addition to alkaline soil since it is an acidifier. Soybean meal has a more neutral pH, however it has been shown to be detrimental to seeds and seedlings in this study by Brown and Davis. Then, there is the slowest of all, feather meal. Feather meal is my preferred source for nitrogen. I special order it in 50 lb sacks from our pet supply store or farm feed store. The seed meals are often available from the same sources, sold as animal feeds.

Feather meal, being sold as a feed does not have a nitrogen figure on the label. Instead, it is labeled as (up to) 88% protein. The protein in seed meals corresponds to the nitrogen in feeds in this way: 100 lbs of nitrogen = 625 lbs of protein. Feather meal 88% protein/6.25 = 14% Nitrogen.

There is another source of organic nitrogen, which you may already have. The organic matter in your soil will slowly release nitrogen to your plants. Here is how to calculate your estimated nitrogen release (ENR): Take your organic matter percent (OM %) and assume 15 to 25 lbs per acre of nitrogen will be released for each percent. So, if you have 5% organic matter, as recommended by lots of garden writers, something like 100 lbs/ac of nitrogen will be released during the growing season — enough to grow low demand vegetables. But most of this release happens during the warmest summer months. N will be released more rapidly in hot climates, less in cooler climates. This is all very approximate, OM% test results can vary widely, like 2X, when we send the same soil sample to the same lab. If you want to minimize purchased nitrogen, you can have a lab do a CO2 burst (Solvita) test. This will tell you more exactly how much nitrogen to expect from your organic matter.

Compost is another source of nitrogen; if it contains chicken manure it can be quite powerful. But, most “compost” is more of a proto-compost – the components are still identifiable, and it is best used as mulch. If unfinished “compost” is dug into the garden it can tie up nitrogen until it finishes. This is exactly what we do not want when adding nitrogen fertilizer. I keep my proto-compost on the surface, under a thin layer of straw, which keeps it moist. The plants seem to love it, maybe because it is such a nice home for microbes. By the end of the growing season, it has turned into a thin layer of humus, ready to contribute to next year’s crop. 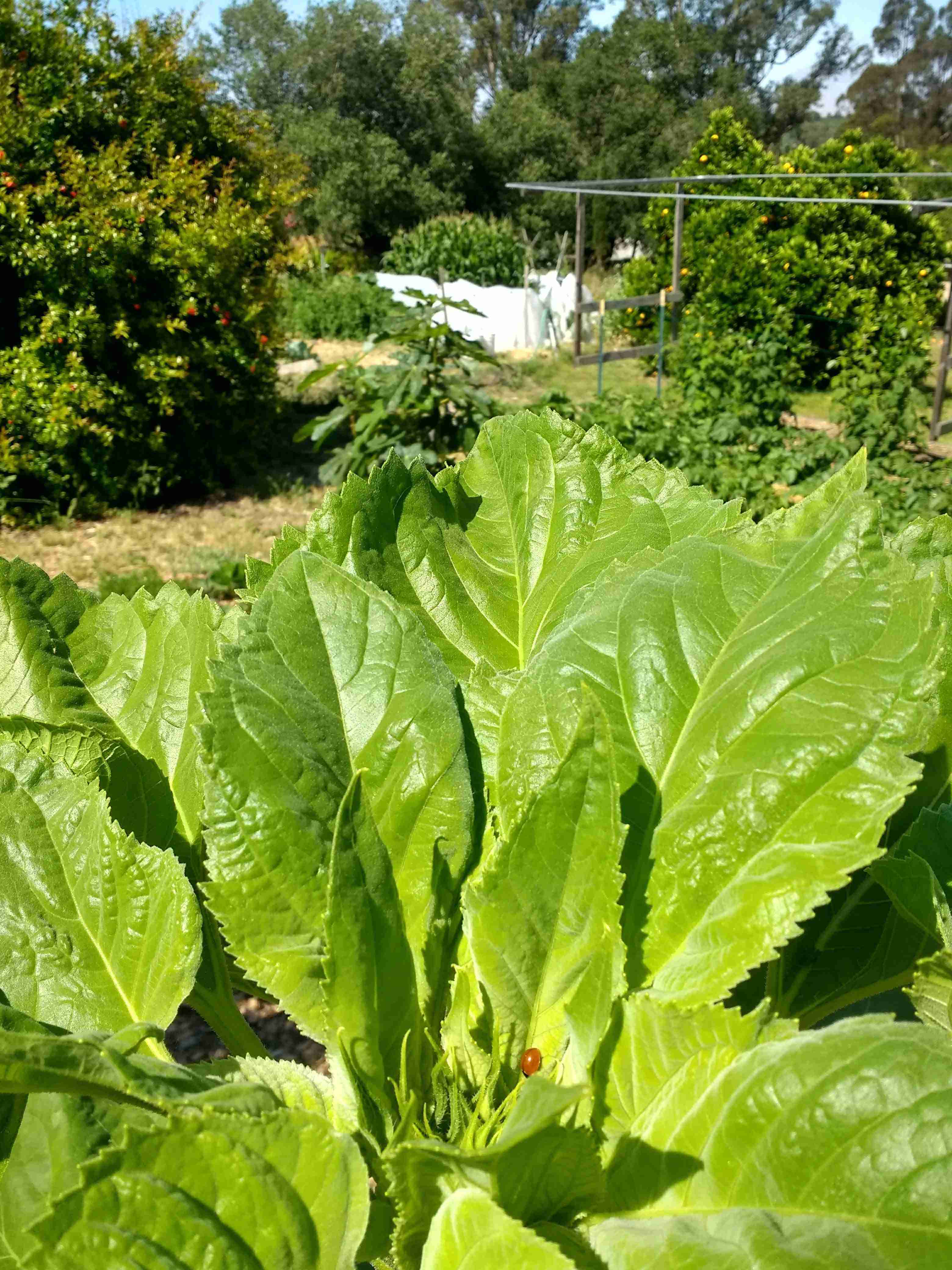